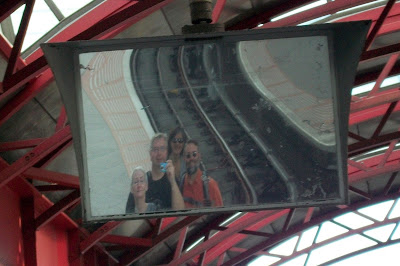 I listened to this one before the Pitchfork review came out, and naturally had to compare it to their 2002 debut full-length album, Turn on the Bright Lights, which Pitchfork gave an astronomical 9.5/10.0 and choose as the #1 album of the year, and which Metacritic rated as "universally acclaimed." And I agree that one was a phenom. Also, I thought the new one would not be rated so high, but still surely an 8.0 or better. So, when Pitchfork's precision scoring system came in at 4.6, I did a double-take and started reading why the kiss of death. It turns out Interpol is a bit too Interpol for the reviewer. He wanted Interpol, and instead he got Interpol. He wanted despair, and all he got was despair. Somebody's cranky. If I didn't already have it his description would have compelled me to get it.

Metacritic aggregates 26 reviews, which shows how big Interpol is. And the reviews are all over the board. Which shows how divisive despair can be. I come down on the "like this one" side. Now, as the reviewer must be doing, I'm going back to Turn on the Bright Lights for a few listens, because it was special indeed. But the new one will make  one of my lists of some sort this year. If I don't get cranky.
Interpol - Interpol | ThinkIndie

(Since the band is from New York, pictured are the Woodruffs and Nunnallys on vacation in London, waiting on the train to Greenwich).

Posted by MilesOfTrane at 9:38 PM