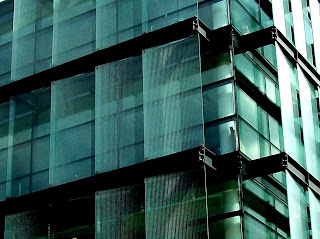 This album is incredibly fantastic and is my current favorite of all time.
Although I toyed with the fusion of Return to Forever and their kin in my teens and twenties, it was bop that first drew my full attention to jazz many years later. Even though at the time of its introduction by Dizzy Gillespie and Charlie Parker at the end of the Big Band era bebop was considered heretical, for us flower children it was in a sense the essence of jazz --  hot and, well, jazzy. As my musical journey to find the neat new stuff emerged  with my blog, I've increasingly realized that jazz has traveled just as far as rock over the past decades, evolving into the best music has ever offered. Wait, slow down; Miles and Trane are no longer with us, so that has to be qualified. But otherwise it is true (and Vijay Iyer has a new album out which I predict will prove my point further).
The Portico Quartet and similar innovators are taking us into a post-fusion era that calls on us to forget describing the timbre or measuring the beat, because it is simply enveloping us in glorious, rapturous sound. I'm elated listening to this album and I thank the Portico Quartet for disregarding boundaries and soaring high overhead. The metascore is so much lower than it deserves. Look higher than the critics allow if you want to spot this one in the stratosphere where it lives and belongs.
(The band is from London, and the picture was taken along the walk from St. Paul's to the Tate Modern, London. I love London).
Isla Reviews, Ratings, Credits, and More at Metacritic 76/100

Posted by MilesOfTrane at 10:17 PM