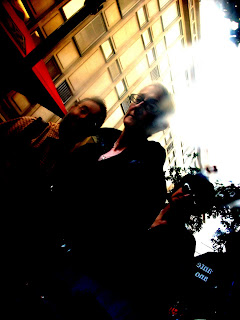 The Mercury Prize means something, honoring the best album of the year in the UK and Ireland, while offering up a supposed curse for many who go on to fizzle after a deserving or sometimes controversial win. It also operates on a sort of oddball fiscal year, it seems, with nominees (all deemed Albums of the Year) announced in July and the Overall Winner named in September.
This year's winner: The xx.
With only their debut album as a resume, The xx have produced something special already. In my opinion they were clearly the best new band of 2009, and now the mixed blessing of the Mercury may have us holding our breath with a little more urgency as we await the followup. Please let it be a step forward. Please. We love them and want to love them forever without a wistful look back.
News - Barclaycard Mercury Prize

The xx Profile at Metacritic.com


(The picture shows three Americans who are as cool as The xx: my wife Susan [center] and Bill and Fran Woodruff. Since The xx are from London, is is appropriate the picture is of the gang on the Great 2010 London Vacation).
Posted by MilesOfTrane at 12:01 PM