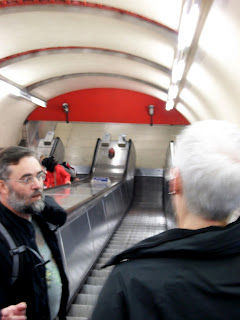 This is music beyond words that describe music. It should be a  9 or better all the way across the board. Easy for me to say, I know, because I'm not a critic, but in this case I criticize the critics for not rating it higher. It's one reason bloggers have it easy -- we throw our darts then turn our backs. But really, if you ever have the privilege to listen to this album by Max Richter, I think you will agree.

It seems this is the way classical and neoclassical music should be headed. Musical styles are so past post-, post- modern that  there is no talk of modernism. New genres spontaneously arise without the need to  be pigeonholed. That is now the model: there is no model. Phillip Glass and his kindred have laid the groundwork in musical composition, so it's time to stop being amazed and start instead living in amazement.

The inspiration for this album arises from T. S. Eliot's the Waste Land as explained here. Only O*Barr, who is an expert on Eliot, can speak to the success of the effort in this regard, but I am qualified to say one thing about it:

(Pictured are Bill and Susan at a tube station, London. Is that Bond Street?  The picture is unrelated to the album)

Posted by MilesOfTrane at 8:55 PM