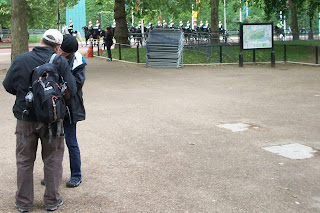 Hip-hop continues to make inroads on my psyche. Albums like this are why. Sounding like Top 40 and R&B and an artist's personal stash of songs too good to release publicly, all at the same time, very accessible yet secretly cool, this album is worthy of its high water marks. This one stands a chance even with those who say they don't like rap; the rapping is disguised as traditional R&B that has taken a leap forward. The dash in his name is the clue; dash off and get it now.
Pitchfork: Album Reviews: The-Dream: Love King 8.6/10.0 (Best New Music)

(Pictured are Bill and Fran changing a lens in London.  They are such good friends. The picture is unrelated to the album)

Posted by MilesOfTrane at 6:56 PM