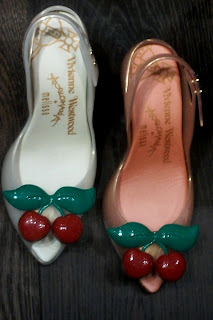 Black City is this month's favorite album of all time. Even O'Barr will flip over this one. Ken, remember last time I told you stop what you were doing and go buy an album, it was the first time I heard Olé Coltrane. You asked whether it was the Spanish olé or the archaic for old as in "Goode Ole Coltrane". You knew, but it was too funny to not ask. This is the logical followup to that email, which was probably  ten year ago. I admit you weren't as enamored as I was over Olé, but then you wrongfully do not worship John Coltrane. This time I guarantee you'll be blown away. This time there's nothing in the title to be interpreted -- yes I realize that is a gauntlet throwing-down assertion but I defy you -- and so this time you know I'm right. Black City: in contention for Album of the Year.
(Pictured are shoes with cherries on them in a London shop window. Fran didn't have her camera and wanted a shot for Cherry. The shoes are not related to the album, but it's a little story dedicated to the Woodruffs)
Pitchfork: Album Reviews: Matthew Dear: Black City 8.4/10.0 (best new music)

You tube is taking down videos from the album as fast as they go up but I think this one is official:

Posted by MilesOfTrane at 10:20 PM