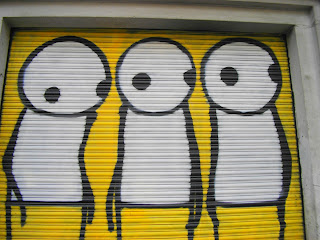 Jazz. I love it. This album kind of reminds me of the immortal Bill Evans. Oh, my. I can't believe I said that. But it's true, he's that good. I kind of love this album that much. You may not know Bill Evans played piano on Kind of Blue, and you may not know Kind of Blue is kind of the greatest album of all time. To be clear, I'm not saying this album kind of like Kind of Blue good, but Bill Evans was not the pivotal point of Kind of Blue. But I've kind of confused the point of this post. Jason Moran has been around for a while, but like any contemporary jazz artist who isn't Wynton Marsalis or Herbie Hancock, how are we supposed to know to listen in? Jason Moran, the subject of this blog post, has created a great album that wins universal acclaim. Ignore the confusion I've kind of created and listen.
Ten Reviews, Ratings, Credits, and More at Metacritic 88/100 (universal acclaim)

Pictured is graffiti art in London. It is unrelated to the album.)

If you're a young jazz musician, listen to Jason Moran, not me:


Posted by MilesOfTrane at 8:20 PM