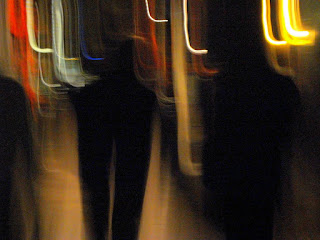 Arcade Fire, like the National, are an example of what some hail as the convergence of critical acclamation and mainstream popular success. Justifiably. Holders of both a past Grammy nomination and also awards that always mean something, Arcade Fire were poised going into this album to make a leap forward. And they have delivered with The Suburbs.  Reed was downright giddy about it when I stepped into Oz Music to buy it, and he knows something about music as musician founder and main brain of Hackberry Records. For some reason Arcade Fire and The National are tied together in my mind, and the release in May of The National's High Violet album represented, to me, a whole new dimensional quality for them. It's hard after a couple of days to compare the new Arcade Fire to High Violet because High Violet like no other album of 2010 has received many reps on my music players. The blogging demands I always listen to new stuff, but only The National, Nels Cline, and Four Tet have truly been recurring themes for 2010. As a simple function of time, The Suburbs has not yet had a chance to manifest such loyalty, and I will only know when I lay it down if it calls to me. Nevertheless, here I am with my third Grammy prediction for 2010. Take the nomination  of Arcade Fire to the bank, and the prize needs only a small hedge to pay off. Hedge it with High Violet, and Broken Bells, assuming they'll even be in the same category. I guess if the Kings of Leon come out with something new they'll have to be considered as well out of reflex.
(Pictured is a shot of my traveling companions at night on the street in Marylebone, London. It is unrelated to the album)