Album Note - The Books: The Way Out 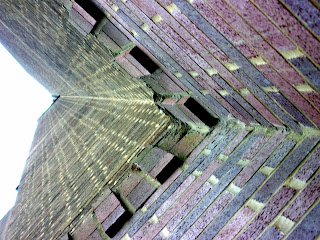 When Eno and Byrne's My Life in the Bush of Ghosts came out in 1981, we were ready for the revolution. Those of us who were born and aware. Though not inventing sampling, Bush of Ghosts made samples into lead vocals for the first time, to wickedly magical effect. Though it is not fair to either the 1981 album nor this one to make any comparisons, the new The Books strikes a similar chord with its usually effective if sometimes tiresome use of injected voices. Sometimes cool chatter, sometimes disturbing meanderings, often lyrical wonderment, it makes for an excellent album because all the sounds, vocal and instrumental, are woven into an intricate shaman's shawl that heals me as it destroys my will to get well. It is difficult to assess the accuracy of the numerical ratings as they seem both too high and too low, depending on the moment, but the album is a necessary addition.  It is a long shot that in almost 30 years I'll be opening a blog post with a reference to The Books because surely by then blogs will be dead . And music will propagate. And jet packs will be relics. And I'll be 80 and living on Mars. "Hey Robert, did you get your doghouse built?"
Pitchfork: Album Reviews: The Books: The Way Out 7.7/100

The Way Out reviews at Metacritic.com 82/100 (universal acclaim)

(Pictured is an outer wall of the Tate Modern, London. It is unrelated to the album)

There's no such thing as a representational track on this album, but: