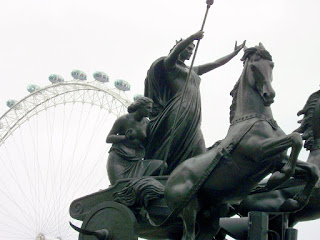 What have been my favorite albums of 2010 thus far? When I started this note I assumed I'd come up with five or so but in looking back it has been an excellent year in music already. Here's my ranking of albums released in the first half of the year. Please post rebuttals and "you idiot" remarks in the comment section, and remember I can't listen to them all.
A top 11? Well, at first I accidentally left off my #3, so when I put it in, the Gorillaz album  dropped into the "tied for" category. I'm already going to have to  put up with O'Barr's snub for scoring the MA and LCDSS albums so low, so it's a concession of sorts to put the Gorillaz in the top tier. That way at least I have something to yell back when my wits get to their end (that's a straight line, O'Barr, so go ahead). It probably should be ahead of the These New Puritans album, but I like the way I've drifted on this.
Tied for 12th in no particular order:
Janelle Monáe: The ArchAndroid
The Black Keys: Brothers
The Dead Weather: Sea of Cowards
Broken Social Scene: Forgiveness Rock Record
Pantha du Prince: Black Noise
Honorable mention, no order:
Citay: Dream Get Together
Laura Marling: I Speak Because I Can
Gonjasufi: A Sufi and a Killer
Junip: Rope and Summit
Flying Lotus: Cosmogramma
Lazer Crystal: MCMLXXX
High Places: High Places vs. Mankind
Posted by MilesOfTrane at 9:11 PM