Another Original Issue for the Coltrane Collection 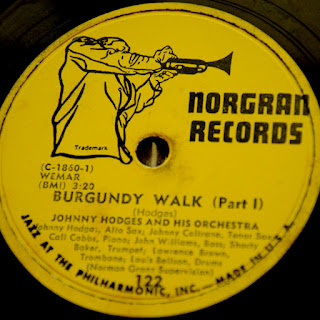 It has become too rare that I discuss great music from the past. This 78 arrived last week after a successful eBay bid on another record in my lifetime pursuit of every original issue on which John Coltrane appeared. This one, No. 122 on the Norgran label, comes as a big band number under the direction of the unforgettable Johnny Hodges. Coltrane is in the background along with the rest of the orchestra. Hodges naturally takes the solo, playing his distinctive alto on this July 2, 1954 session in L.A. Coltrane is on tenor, the instrument with which he made his greatest marks. Hodges plays in such low registers that I thought at first it was the tenor, but the playing style and session note confirm it is not 'Trane on lead. This record is just part of Coltrane's dues paid on the rise to the summit.
Sorry but THIS 30 second snippet is all I can find.
Posted by MilesOfTrane at 11:32 PM