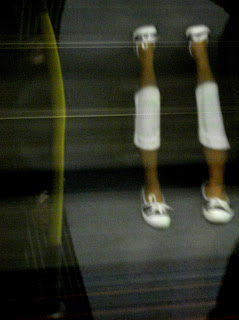 The model is set. From now on pop stars release three disk albums, one at a time, called Part 1, Part 2, and, a third part that just called by the title without mentioning the parts, including the best of the first two plus, well, we're past the formula stage. Robyn's first two have received massive raves and now the third is whooping up on the others, with a phenom level 8.7 on the 'fork. Get her while she's hot, which from the looks of it will be quite a while. It's difficult for me to be highly impressed by pure pop as a genre because it's lines are usually too clean for my taste, but pop is short for popular and there's nothing wrong with that.
Pitchfork: Album Reviews: Robyn: Body Talk 8.7/10.0 (best new music)

Posted by MilesOfTrane at 10:12 AM