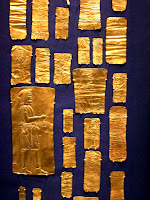 Nine Inch Nails Pretty Hate Machine has been reissued so if you missed an industrial metal classic then here's a second chance. Meanwhile, Killing Joke has released a new album called Absolute Dissent. Metal is a loose term in these days of hyper sub-genres but I like the original first gen metal of the likes of  Led Zeppelin  (who were actually so beyond classification that they should not be classified as metal) or the new gen metal of Alcest, Kylesa, and Chrome Hoof, more than either the mid-gen Nine Inch Nails or the new material from the old gen Killing Joke, which were sort of first gen. I want to say gen one more time but metal wears me out.
Pictured is some metal in the British Museum.
Pitchfork: Album Reviews: Nine Inch Nails: Pretty Hate Machine

Posted by MilesOfTrane at 10:53 PM