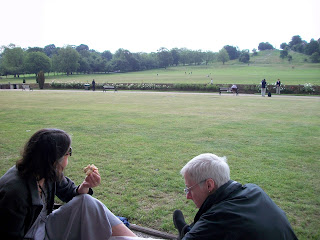 The silence on the blog has been an unusual phenomenon resulting it seems from a wicked virus that made music irritating -- not unusual for me to dislike sounds when I'm sick, but very strange how the annoyance with music lingered after I got well. It probably was set up by the rapid pace at which I had been listening to new stuff. Before the virus, my quest for new blog material had me always craving new sounds, and I think I was reaching a saturation point at the time the virus hit. Also, I've been preoccupied with my other diversion, my poetry blog called Nominal Input. To try and shake it all off I found that any new music was out of the question. Going to old favorites seemed like a good tactic but I could get through no more than a couple of minutes even of albums that I have always and will always love.
But tonight I had success with A Love Supreme by John Coltrane. It suddenly came to me that I wanted to hear it, and I enjoyed every moment. Coltrane wrote the music at his home studio, late in his short life, and it was his opus major. After he got the tracks down on tape his wife says that for the first time ever he became engaged with family life, attending to the children and interested in things other than his music. It wasn't until that point that the man who practiced 14 hours every day and thought about nothing except music all his other waking time, had finally purged himself by recording the sounds he had been hearing in his mind but could never quite get from his horn.
If a desert island pick were down to one I'd still probably go with Kind of Blue, mainly to hear Coltrane take over "Flamenco Sketches" with his unparalleled solo (only to hand it back to Miles' fragile trumpet in the final solo), but I would immediately begin bargaining away food, water, and air to also take A Love Supreme. Miles Davis' Kind of Blue marked a point of progression and pinnacle in the modal style of jazz, but A Love Supreme can hardly be categorized at all except that it is indeed jazz, it is by definition music, and it was and always will be magic.
Hopefully all gets set to right very soon because I've been accumulating notes on a lot of new releases over the past month, even though I couldn't bring myself to listen. Here's a list of potential posts, although it is hard to say if they are now too old now for a relevant note -- and to think how far behind I am...
The Acorn: No Ghost
The Walkmen: Lisbon
Grinderman: Grinderman 2
Robert Plant: Band of Joy
Swans: My Father Will Guide Me Up a Rope to the Sky
Superchunk: Majesty Shredding
Andrew Cedermark: Moon Deluxe
Vijay Iyer: Solo
How to Dress Well: Love Remains
Flying Lotus: Pattern + Grid World EP
Deerhunter: Halcyon Digest
No Age: Everything in Between
James Blake: Klavierwerke EP
Marnie Stern: Marnie Stern
Twin Shadow: Forget
Sufjan Stevens: The Age of Adz
The Fresh & Onlys: Play It Strange
I'll probably have to acknowledge the re-issue of Morrissey's Bona Drag, which was truly fantastic as originally released even though Morrissey is a nut.
Posted by MilesOfTrane at 11:08 PM