Album Note - Swans: My Father Will Guide Me Up a Rope to the Sky 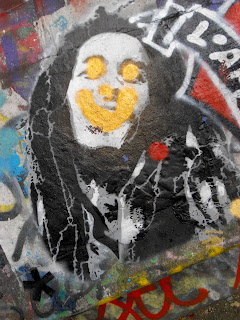 O'Barr wanted this note for a reason. It's a fantastic return album for me after the lull and an incredible revival album for the phenomenal Swans. The O'Barr knew what I needed. The band started in the 13th century, wallowing first in the noisy No Wave revolution that lasted 29 nanoseconds (but which continues its influence even today), progressed almost instantly to even newer approaches (a point too neglected), then went on hiatus (pre-mimicking this blog) for 7 and a half decades.  (Disclaimer: some of those time statements are exaggerated except where I say "instantly").  Talk about not missing a beat and saving something for the sequel!

This is a YES, unlike anything else this year.
The critics get all caught up in Michael Gira’s existentially apocryphal and despairing lyrics, but really -- have they read a headline lately?  Then again, they are right, and it's part of what makes the album's hard edged industrial and depressing droning speak to the human spirit, even one that seeks harmony and transcendence. This is post-post- No Wave merged into post-pre-post-punk, with shards of pre-post-pre-metal and pre-pre-post mesmerism.  To casual listeners, be warned: this is head-messing-with music, so don't ask for your money back from me. To those who have lamented the Swans' disappearance this last decade and a half: this is your Wave, ride it. Metacritic will link you to all the major reviews for words from the pros, but as a blogger and listener I'm on board.
Pitchfork: Album Reviews: Swans: My Father Will Guide Me Up a Rope to the Sky 7.7/10.0

Critic Reviews for My Father Will Guide Me Up a Rope to the Sky at Metacritic
Posted by MilesOfTrane at 5:49 PM