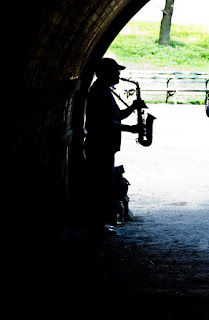 I defer entirely to the Pitchfork review on this one. It is so fresh and new and different that I'm still taken aback, much in the same way as when I discovered Max Richter's Memoryhouse. (In that case, years after its release). Although New History Warfare Vol. 2: Judges album came out in March, and he now has a newer album just released (that I'm quite eager to get), I've just now discovered Colin Stetson. His music won't be an easy listen for mainstream music fans, but this is something special. The first song below is only slightly more than a minute, and even then it takes a while to get started, so if you hear it and ask what's the big deal then you know you can walk away with very little investment. But if you react like I did then you will read the review, listen to the sounds, dream in shaped-note colors, and hope that minds like this never stop coming into this world.
Colin Stetson: New History Warfare Vol. 2: Judges | Album Reviews | Pitchfork
Colin Stetson on last.fm
On Facebook. I feel good that after writing this post I looked him up on Facebook and saw that no less than Alabama's own Jason Isbell is touting Stetson's new album for the Polaris Prize. Come on MOG, Napster, and Spotify, get that new album posted!
All the days I've missed you (ILAIJ I) by Constellation Records