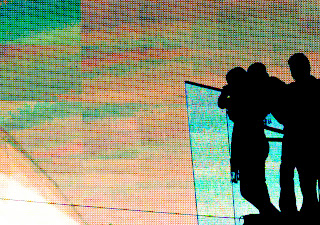 A band started in the Mali refugee camps of Libya, by members hardened in murderous uprisings, oppression, and exile, suffering through drought, hunger, and inhumanity, that goes on to garner enough international acclaim and clout to release an album featuring the likes of Nels Cline and Tunde Adebimpe, should perhaps be greeted with the wide eyes of amazement. The amazing thing is that even without the back story, this music is good enough to justify the amazement. The band is Tinariwen, and the album is Tassili. If you've been wanting to explore contemporary world music, this is the one to start you off. I find it truly awesome, not in the newspeak ubercool sense, but in the original I'm-in-awe sense.
Tassili Reviews, Ratings, Credits, and More at Metacritic (universal acclaim)

The video lacks the magic guitar of Nels Cline, who is featured on the studio release of this tune. The video does not do any of the album justice. Go to the band's myspace site for a better experience. No, download the album or buy the CD. Now.

Posted by MilesOfTrane at 10:00 PM