Mogwai: Hardcore Will Never Die, But You Will 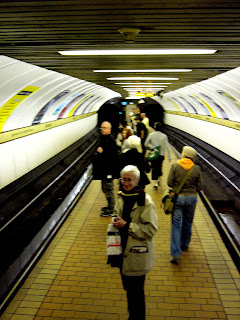 A puzzlingly low score for this album at Pitchfork. If you threw out just a few of the 25 reviews aggregated at Metacritic then you are very close to universal acclaim.  That's more like it. We love this band from Glasgow, one of the true gem cities in the world with a band of which it can be proud. The city's vibrancy shows in Mogwai's post-rock style of music. The genre is not exactly vibrant in the sense of rousing but it's not meant to be. It's vibrant in the sense of beautiful and exhilarating. This edition called Hardcore Will Never Die, But You Will is steady state for the band, and that's enough for me to love it. O^Barr, that's a go.
Pitchfork: Album Reviews: Mogwai: Hardcore Will Never Die, But You Will

Hardcore Will Never Die, But You Will Reviews, Ratings, Credits, and More at Metacritic

The underground in Glasgow is called the Clockwork Orange. It's featured prominently in this video. Above is Susan waiting on it, from our 2008 trip to the magical Scotland.


Posted by MilesOfTrane at 4:45 PM