The Exhilaration and Exhaustion of Music Blogging 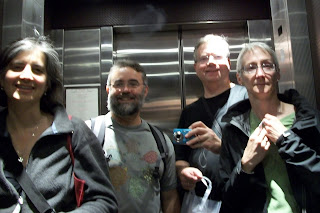 Yo, so music blogging is just a hobby. Yo, so it's all fun, all good. Yo ho ho. Sure, there's the the bright lights and huge parties where all the stars court your favor, but lost in the blasting fine good times is that for 2010 alone I created 400+ posts. While a fair share of those were simple links to something good (or not published for various reasons), most required effort.
If you've paid any attention to me long term (why would you? but if you have...) you know that blogging is a form of discipline to make me listen to new music. I hear a lot of stuff now, and in pre-blogger life I probably would have heard of maybe ten to twenty of the albums I blogged about this year. Of the many albums I heard, with rare exception it was only the ones I liked that I wrote about. Since my mission is "Concentrating on finding the most interesting music of today and yesterday,"  I rarely have the time or patience to write about stuff I don't like. I'm not a critic, just a blogger blabbing about music that caught my ear.
So, understanding that more than 60 albums made my Top Ten + Best of the Rest post, I estimate I listened to a lot of freakin' music. That's an investment of time, so I read reviews to first decide what to give a chance. Since I use multiple trusted sources, the odds aren't bad that I'll like something I try. Still there's a lot that gets rejected. Unfortunately and perhaps unfairly, these decisions have to be made quickly. I will say that if I do post a negative note (which usually involves an artist or album for which expectations were high), I give it a lot of listens. Excellent music is appreciated over time, not with a hurried listen, so it's unfair to casually dish out a dis.
Which leads me to the year end awards: how do you judge what was best when there was so much? For the Top Ten, the answer was in what I kept returning to over the months when I merely wanted something good. With the self-imposed pressure to listen to new releases, I can ill-afford to waste pleasurable listening time. But to make a pick like Album of the Year, a lot of additional listens were required. That's actually true of all the 60 or so I liked, because to put your approval on something needs to mean something. I can even critique myself for leaving a few off the Best of the Rest list, like the David Byrne and Fatboy Slim effort Here Lies Love that somehow just got overlooked.
As for Song of the Year, this is probably the last time I'll attempt that. I'm such an album oriented listener, and there are so many damn songs. Artist of the Year was the easiest pick. Matt Stevens represented to me the pure artist of 2010 who put the art -- high quality art -- out there for the sake of the art. I hope he keeps making his great music for many years.
Where am I now? Hearing all that great music in 2010 -- and I believe it was an excellent year for sound -- has left me feeling like I am taking something of unique value from the year. At the same time, I'm tired from all the listening. I need to show some discipline by taking time off, because the danger of over saturation is real and can lead to an almost physical rejection of any more, as happened to me in September. So even though I can't help but look at what's around the corner (the new DeVotchKa's not out until March?!), I need to take a week or two off and recharge. 2011 is already promising and I want to keep this going. I love the music of the past -- maybe it's time for a few weeks of big bands, Miles, and Coltrane --  but since art will always build on what went before, the only thing better than today is what will come tomorrow. It'll always be the Golden Age, and I look forward to enjoying the now forever.
Posted by MilesOfTrane at 10:19 PM