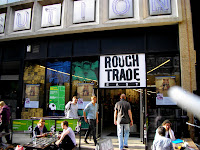 Rough Trade Records on Brick Lane in London is renowned as one of the great music outlets in the world, and in my heart it is second only to Oz Music in Tuscaloosa.  I found it near the end of a long day spent scoping out street and graffiti art. My three traveling partners had gone off to Stonehenge, which I had seen on a previous trip. Since they were less excited than I was over the potential to see the seedier side of London, it was the perfect time to split up for the day. But, since it was late afternoon and I had to walk back through troubled neighborhoods alone, my time there was limited. 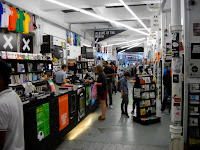 So I quickly found one of their recommended listening kiosks, which resulted in picking three CDs to purchase. First up was Astro Coast, the debut album by a Florida-based group called Surfer Blood, which came with a bonus CD exclusively for Rough Trade with a demo, some remixes, and live material. This CD gets an 8.2/10.0 and 'best new music' designation at Pitchfork, but I'm not sure I feel quite that much love. I like it but it may take a lot more listening before I would agree with this kind of accolade. Nonetheless it is worthy of a listen and I'm glad I got it.
With about the same level of satisfaction was Shadows by Teenage Fanclub. Pitchfork gives it a very respectable 7.4, and maybe that's about right. It's not overly sophisticated but it's not intended to be and is quite a fun listen.
My second favorite of this purchase was Tracey Thorn's Love and its Opposite. I would have rated it higher than the 6.9 it got at Pitchfork, demonstrating that differing views of music is everlasting. Thorn is half of the group Everything but the Girl. Upon hearing the lyrics I would have sworn she has had some recent relationship issues, but maybe she is simply able to turn on inward pain for creative purposes. It's great stuff.
My favorite purchase by far is not a recent issue, Four Tet's Remixes. This double CD has one disk remixing works by others such as Radiohead and Madvillian. Four Tet, who real name is Kieran Hebden, is considered somewhat of a music engineering genius and indeed he was given a thank you in the liner notes to In Rainbows. The other disk contains remixes of previous Four Tet works. I'm simply blown away that Pitchfork gave it a mere 6.8 because this is a work of brilliance and amazement and my only regret is I haven't owned it since it came out in 2006.

by Teenage Fanclub
Posted by MilesOfTrane at 3:25 PM