Follow up on the new Chrome Hoof album "Crush Depth" 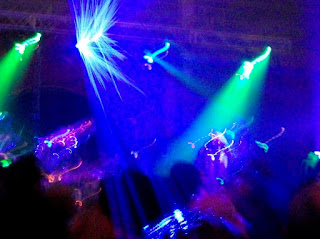 I can't be objective because Chrome Hoof was part of one the great experiences of our London vacation. (Yes, I'll shut up about it at one point but this time it's pertinent). Metacritic now has a rating out on it, and in my mind it should have been higher. There's only five reviews thus far, underlining the fact that the band is mostly a local favorite in London. The video shows why they are probably greater live than in the studio -- it's a visual and sound experience. They played this song when we saw them.

Posted by MilesOfTrane at 9:34 PM