The comparison in the Pitchfork review to Four Tet should not be mistaken for saying it is anywhere near as good. It isn't, but it doesn't have to be. It still accomplishes the main objective and I'm intrigued by his technique. I agree with the review that others do it better -- Four Tet and Nels Cline automatically come to mind, as their recent pedestal-placements on this blog might indicate. A 7.6 score? Maybe about right. Close enough. I like it and am glad to have it, so that's enough for me. For you, the reader who may not own it already, it's a tougher call. If you're interested in venturing into jazz-fusion-inspired electronica, then start with others on the blog that I rave about with more enthusiasm (two are mentioned in this post).  If you're a connoisseur of the genre, then you need it. To the masses in between, to Laurie Anderson, and to O'Barr, love and peace. (BTW, this is an announcement that Laurie Anderson has a new album out and if you are among the brainwashed fanatics who believe it would be genius if she lit a match on stage and blew it out, then you'll have to have it. She annoys me, which annoys O'Barr, which annoys Laurie Anderson. Close announcement). 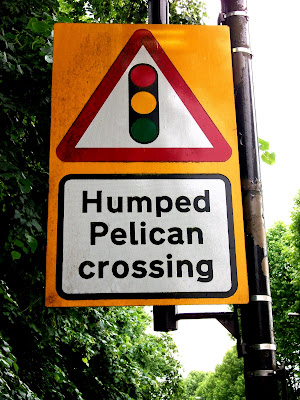 Pictured is a sign that says Humped Pelican Crossing.
Posted by MilesOfTrane at 10:17 PM