An amazing 90 on Metacritic. To put that in perspective it is safely in the top 25 of all time Metacritic scores, which go back a decade. That is phenomenal. And I'm raving about it, I think. Did I have to buy it? Yes. Is it truly phenomenal? Emphatically, yes. Do I love it? I'm not sure. Yes. No. Yes.

Having recently heard amazing rap from Drake and especially The Roots, I'm able to say with certainty that Big Boi is not  my fave hip-hop of 2010. But I'm  concerned about myself in one major respect: like a grandmother, the continual f-word, n-word, and degradation of women that is a hallmark of  the genre, takes its toll on me as I listen. Clearly The Roots and Drake sprinkled these cuss words liberally, and it is silly to suggest it is limited to rap, but with most of the others the artistic placement was more apparent. With Big Boi I want to go out and randomly kick some butt, so wearing on me it becomes. That is,  I want to do this between moments of wonderment that someone can make such great music.

Which is why I'm suspicious of my viewpoint on this album. He's supposed to make me feel that way. Hip-hop is a social commentary of the war that goes on in the daily lives of multitudes. Art provokes as much as it evokes, and Big Boi is highly successful when thusly measured. With the previous rap albums that I adore I was elated by the emotional effect and disconnect. But Big Boi is too successful at what he does, so I feel dragged down. Thus the 90 on Metacritic really gets no argument from me, but until I recover a bit I won't be listening as if it were a 90. Time, let's trust, will bring its healing to bear. Because there's too many great sights and sounds on this album to not come back. 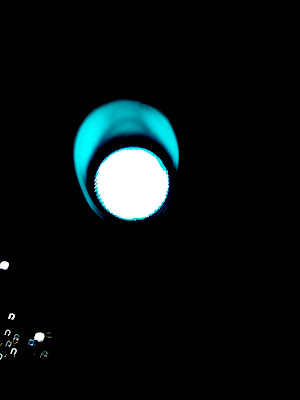 Pictured is a green light.
Posted by MilesOfTrane at 9:40 PM