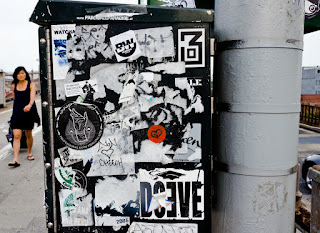 Two and three, maybe four minute tunes, a top 10 album on campus stations, and sky high opinions by the professional critics, with justification. If this is what the kids are listening to then there really is a reason to begrudge the loss of youth. Both electronic and traditional sounds permeate the music, and we distinctly hear the jazz  that's in Steven Ellison's blood as he is the nephew (by affinity) of John Coltrane and (by consanguinity) Coltrane's second wife Alice, a respected musician in her own right who did some really strange things. Plan to spend some time with this album.
As I struggle to understand the later  free form avant-garde works of John Coltrane, I can't help but wonder if music like this made by Flying Lotus was where John was headed. He died way too young and never got it quite there, but I'm left to wonder if given another 20, 30, 40 years of life he would have lead some of the sea-changes in jazz that were hinted at in his last years and days, the kinds of movements Miles Davis saw to fruition --  and whether they would have headed in this kind of direction. That may be asking too deep a question 60 years after the fact, but in my mind it's all connected.
An interesting observation on Metacritic is how almost universal the universal acclaim really is, with only a couple of dissenting votes out of 20 or more reviews surveyed. Pitchfork is the probably the site with which I find myself in agreement most often -- when I can understand what they are talking about --  with Metacritic being a vital tool to bring some objective sanity to the subjective world of artistic criticism.
Pitchfork: Album Reviews: Flying Lotus: Cosmogramma 8.8/10.0 (Best New Music designation)
Cosmogramma reviews at Metacritic.com 87/100 (Universal acclaim)
Cosmogramma

Customers at Amazon gave it a full 5 stars:

Posted by MilesOfTrane at 11:28 PM